History of The DeSoto

In early 1928, O. C. Lam, owner of Lam Amusement Company, laid plans to construct a new movie theater in Rome, Georgia, modeled after New York’s Roxy. It was the first venue in the South designed and built as a “talkie” for sound films.

When the DeSoto opened in August 1929, it was one of the seven largest movie venues in Georgia.

It was an instant success and the pride of Rome. The Historic DeSoto Theatre Foundation maintains and preserves this legacy for future generations. 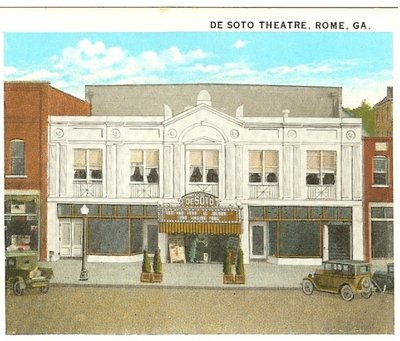 The Historic DeSoto Theatre Foundation is a non-profit organization established in 2008 to secure the future of the iconic 1929 theatre in downtown Rome.

We are committed to preserve the tradition and legacy that is the Jewel of Broad Street. It is our mission to usher the movie house that introduced us to “talkies” into the age of “selfies” and social media.

As the Historic DeSoto Theatre Foundation started renovating the upstairs of the building, a Berry College Bonner Scholar documented the condition of the building and the progress of the renovations. 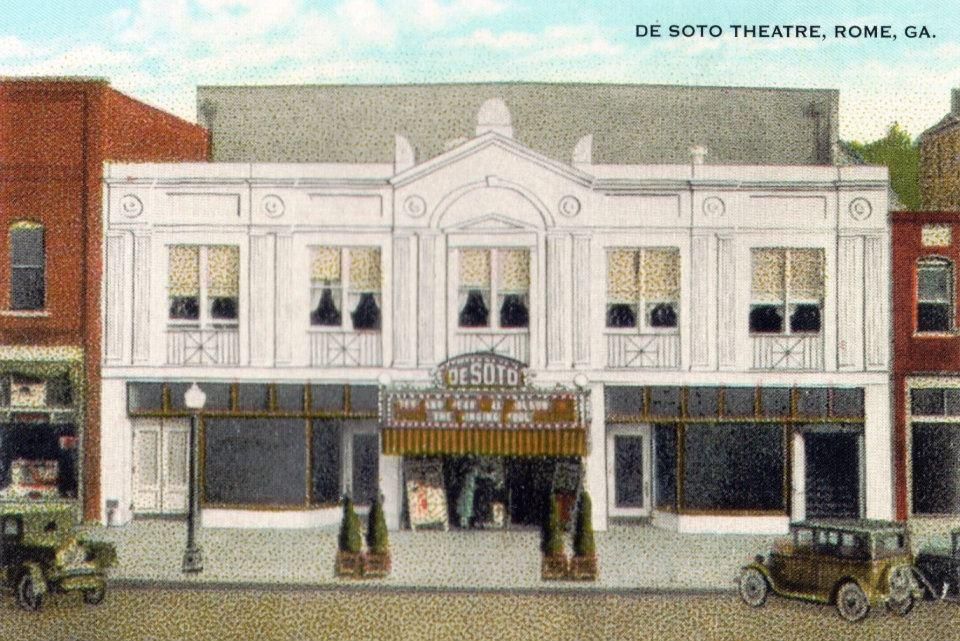 On August 5, 1929, the DeSoto Theatre opened its doors to the public, the first theatre built for “talkies” in the south. O.C. Lam, owner of Lam Amusement Company, modeled it after the luxurious Roxy Theatre and equipped it with the most modern conveniences at the time at a cost of over $100,000.  “The Rainbow Man” was the first movie shown.
1947
December 1

Rome’s oldest community theatre troupe purchased the DeSoto and converted it into a performance venue equipped with a stage, an orchestra pit, and new seating.  RLT’s first play here was “The Sound of Music.”
2008
November 1

Rome Little Theatre deeds the DeSoto to the Historic DeSoto Theatre Foundation to preserve and maintain the building.
2009
February 1

Atlanta’s Fox Theatre Institute selects the DeSoto to be one of the first theaters in Georgia to receive restoration and revitalization aid, serving as a catalyst for additional renovations.
2011
March 1

Lighning strikes a post in the back of the DeSoto, causing an electrical fire that could have engulfed the building.
2013
March 7

HDTF signs 10-year lease with 7 Hills Fellowship to continue Sunday morning services at the DeSoto, as it had done during the previous five years. & Hills Fellowship also invested over $700,000 purchasing the building adjacent to the DeSoto for offices and meeting space.
2014
February 1

A concessions counter in the Art-Deco style and a catering kitchen were added, to be used for events and community rentals.
March 7

A sold-out crowd welcomes Rome’s own diva back to the DeSoto for a world-class performance the evening after she opens the season at the Metropolitan Opera House in New York.
2017
December 1

The Historic DeSoto Theatre Foundation celebrates 10 years of being a champion for the restoration of the DeSoto, the Jewel of Broad Street!
Skip back to main navigation